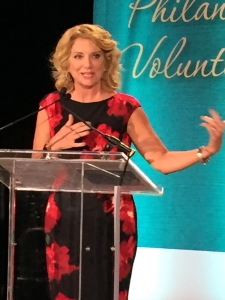 What an honor to emcee the United Way of Greater Philadelphia and Southern New Jersey Women’s Leadership Initiative Gala for a second year in a row.  And this year was just as amazing as last year.  I got to spend time with 66 young women participants in the “Girls Today, Leaders Tomorrow” program. After spending time with them, I have no doubt they will be our leaders of tomorrow – aptly fit for the theme of #womensleadership.  They have grit, determination and a bright outlook on the possibilities ahead of them.  I’m inspired. Not only inspired by them but  I’m also inspired by the women involved with the Women’s Leadership Initiative: Tina Tinneny,  Jami Wintz McKeon, Sandy Pfeffer, and Lindsay Johnston to name a few.  These are wildly successful women with full lives, paying it forward to make a difference in the lives of women and girls in our community.

A great way to celebrate and honor women in the month of March. If you missed it last month I did my first Twitter Chat and had a blast with United Way of Greater Philadelphia and Southern New Jersey on the topic of women’s leadership, volunteerism and more.