A First for Me: Breast Cancer Awareness Month

A First for Me: Breast Cancer Awareness Month

Since its inception in the 1980’s, I’ve been joining the mission of Breast Cancer Awareness month to do news stories, focusing attention on prevention, mammograms and research.  In 2006 and 2008, I joined a group of friends on the Susan G. Komen 3 Day 60 mile breast cancer walk.

But on Friday, I did something I’d never done before – I told my own personal story of breast cancer which began with a diagnosis in January 2015. I had been asked to deliver the keynote, to a room, mostly filled with survivors.  I was bonded with these women even before I began to speak, I did admit to one of the organizers though that I felt somewhat unworthy to speak in front of women who I’m sure have had a much harder fight than I experienced.  She said, “Cancer is cancer, along with all of the emotions that come along with that word.”  I was so happy to share and connect.  It’s a club that no one wants to get the invite to, but now that I’m part of this community, I see it as a great blessing and opportunity to tell my story in hopes of educating, advocating and inspiring.  #DontWait 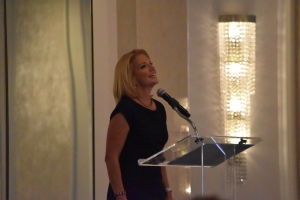 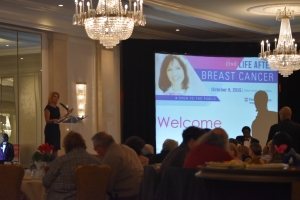